In the psychodynamics domain, integration is the extension of the influence of a cognitive process across the nervous system and body. Integration involves the reinforcement of pathways between an energetic function and other emotional, physical and psychological systems. This leads to the formation of a complex whereby the cognitive function has strong reach across physical, auditory, linguistic and motor regions - allowing for its practical manifestation as an embodied personality. When this happens, a cognitive function is said to be conscious.

The CT model describes four main aspects of integration: ontological status, purpose and value, archetypal character and practical abilities. These four aspects correspond to mental, emotional, spiritual and physical integration respectively. The degree of integration in each of these aspects can vary independent of the others, allowing a person to have integration in some aspects while not in others.

Integration of a function's ontological status refers to the cognitive recognition of its object type and object form as fundamentally true and real. Every object type represents a style of ontology, inclining each energetic to form a bias of what is "real" and "true" that aligns with that ontology. These four ontologies are approximated as essentialism (J-), pragmatism (J+), time (P-) and real-time (P+). The default proclivity of the psyche will be to validate the ontology of conscious functions and to invalidate the ontological status of unconscious functions. For example, an essentialist (J-) perspective will struggle to validate a pragmatic (J+) definition of reality and of objects due to how essentialism resists seeing contingent definitions as fundamental or real. Integration would involve the legitimization of an energetic function's ontology at the philosophical level, resulting in a transformation of the conceptualization of objects across the entire psyche.

Integration of a function's purpose and value refers to an affective connection with a function's personal meaning and its capacity for life enrichment. While ontological integration may acknowledge the legitimacy of object types at the conceptual level, purpose and value answers questions such as "Why do I need it in my life?" When a function is not purposefully integrated, the emotional attitude towards the function may be unfavorable. Examples of this attitude may be expressed in sentiments such as: "People who concern themselves with this domain of life are slaving away, torturing themselves, or missing the real point of living." A milder form of this depreciation could manifest as a feeling of indifference, such as: "It’s fine for others to concern themselves with this domain, but it’s just not for me." This aspect comes to be integrated when the psyche develops a proactive respect for what the function has to offer and a thirst for the fruits it can add to one’s life. The perspective of the function then changes from one we could do without, to one that we like, enjoy using and see the inherent goodness in. When we integrate the function’s value and purpose, it’s no longer something we do out of necessity, but as something we feel positive, respectful and excited about.

Integration of a function's archetypal character refers to a synchronization of personhood with the archetype that emerges from the function, either as the Puer/Puella, Prince/Princess, King/Queen or Senex/Crone. The integration of the archetype may happen spontaneously, or it can be assisted through the methods of analytical psychology. The process involves a confrontation with the fantasy of the personal unconscious, the analysis of dreams and the investigation of a person's symbolic matrix through active imagination and word association. During this process, a function nearing integration will manifest fantastically from the unconscious as a sub-personality with its own symbology, voice and desires. Integration is successful when the ego expands to include this personality into itself, causing the ego to become synonymous with the Puer, Prince, King or Senex archetype. The archetypal character is then identified as oneself, and the person viscerally integrates its life role as well as the responsibility of being that character in the world.

The integration of a function's practical abilities refers to the development of behaviors most statistically connected with that function in I--- developed individuals. Examples may include working on one's public speaking skills (J+), learning to flow gracefully in dancing (P+), developing routines and consistency (P-) or crafting an object meticulously to the point of perfection (J-). Integrating this aspect involves acquiring specific skills and abilities tied to the physical, such as agility, dexterity and rhetoric. This can also involve changes in lifestyle and career which correspond to those practical abilities. This aspect is considered integrated when the function it manifests through the body in measurable effects, along with agency and impact. 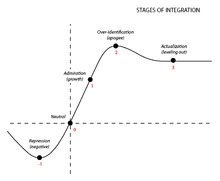 Unless prompted by an acute psychic emergency, the process of integration is gradual, transpiring over the course of months or years and involving successive stages. Since integration is equivalent to a change in personality or character, the rate of integration is contingent on the transformative capacity of the individual and the personal difficulties involved in the process. In a case of successful transformation, the process of integration resembles a sine wave pattern, characterized by a trough and a peak, followed by stabilization. While this process transpires gradually and incrementally, the model divides this process into five general stages:

At birth, all non-primary functions exist as modules of information processing unaffiliated with other psychic systems and are therefore considered unconscious. The psyche's relationship to these processes is initially neutral, where neutral equals zero. However, repression or denial is a stage below zero, where there is a subtraction of libido from a function and an active libidinal force directed against it. This force presses the function into negative values (-1), into a psychic deficit. As a result, the function becomes daimonic and disassociated from the ego. In this state, the qualities associated with the function are thought of as dangerous, defective and invalid. The process of integrating past this stage involves a recognition of the function's legitimacy and value. Examples of these recognition may include understanding that:

When the polemic against the function is lifted, the remaining stages of integration can proceed.

Neutral refers to a neutrally unconscious function stage. When no psychic force is actively pushing a function into negative values, this is where an unconscious functions will typically reside (0). A neutrally unconscious function does not have a polemic against it, but it is also not highly valued or preferred. The psyche's relationship to a function in this stage is called negotiative. It will call upon the function's behavioral abilities only when it cannot avoid doing so, and will negotiate the energy cost involved in the transaction. An example of this negotiation may be: "I’ll use you, if you get me through this assignment/party/conversation." The function is allowed to have some psychological presence but as part of fulfilling a certain momentary task before it is disengaged. The individual trades energy and time into the function to get results with the function when its use cannot be avoided. However, such moments are necessarily brief, as the psyche cannot sustain the energetic toll for prolonged periods.

Next we come to the first stage that marks the function's positive rise into consciousness. The relationship to the function is now one of admiration (1). Since we do not yet have this function manifested fully in us, admiration happens from the outside — usually in the form of someone who has that function developed already, or who leads with that function. We gravitate towards topics and talks about it. Our appetite for information increases and we start to see the value in its perspective of life and reality. This is where fetishization occurs, and much like the development of our initial personality as small children from our parents, we start to learn by imitation. We may feel inadequate but we try to be better, and our life trajectory is heading in a direction of slowly manifesting what we admire.

But then the next stage is one in which there is ego-identification before there is full development. This stage is perhaps the most counter-intuitive. The ego now expands to include the function, but in so doing it is over-identified and it over-corrects in the process of coming into consciousness. Like falling in love, the integration of the function amplifies its state in the mind even beyond that of a person who has it as their lead. In Over-Identification, it simutaneously feels like the epitome of what they are, yet paradoxically also what they’re striving to become.

There is a naivete to the process, too, which does not yet fully grasp the consequences that come with the function and the need to take responsibility for them. There will be an over-enthusiastic pronunciation of its value, in a way that is actually uncharacteristic of those who lead with it. This also comes with some naivete as to how to go about using their newly found function because, in the freshness of it, they mostly see the value of it.

Then at the final stage, the “magic” starts to wear off when the person realizes that, like everything else, it comes with a cost and it’s not so fantastic and all-powerful once it’s off the shelf and in your room. The function is “actual”-ized, which means it moves from the fantastical to the actual, and thus loses some numinosity but adds the function’s practical energetic abilities wholly to the personality. It’s now fully conscious, but this also means it’s like breathing air and not an extravagant matter anymore. It’s role in the psyche now comes to be mediated with the needs of the rest of the psychic economy. Usually a person who leads with a given function is the most aware of the problems of having that function, and has spent years dealing with those problems creatively and toning down the rough edges it can have. The individual with an actualized function will now treat their new function the same way. 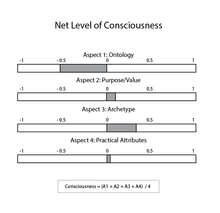 The five stages of integration apply independently to the four aspects of integration, allowing each aspect to be in its own independent stage. For example, an individual may acknowledge the ontological status of J+ while not yet possessing its practical abilities or embodying its archetypal character. As a result, function consciousness is multivariable in nature. However, the overall level of consciousness of a function can be approximated, or simplified, by combining the sum of the stages of each aspect, and dividing by four.