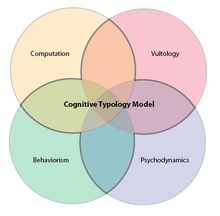 Cognitive Typology utilizes a holistic experimental methodology, composed of four interlocking domains of study: computation, vultology, behaviorism and psychodynamics. The four domains function independently, but work in parallel on the same task. The theoretical components of the model are constrained to the intersections of the domains, restricting its theoretical scope to only what can be confirmed across the four fields. The model refers to this as the four-way check, utilizing this intersectionality as the primary way to control for theoretical deviation. Additional theory tenants are not added unless there is parity across the four. Thus, the theory retains only the tenants that are manifest in a person's way of computing information while also being visible in their expressions, notable in their behaviors and evidenced in their psychic dynamics.

Experimentation begins by examining a new sample using the vultology and behavior domains to gather two independent data sources: body expressions and behavioral traits. Once both are gathered blindly, the two datasets are compared to investigate whether there is a correlation between expressions and traits. Positive correlations are called signals, and are documented in a matrix called the vultology code. This code develops as a matrix of parallels between expressions and traits, and in subsequent experiments, samples with a previously documented vultology are examined to see if they also contain the behavior previously correlated to that expression. If the correlation is not present in them, the code updates the degree of statistical parallel between the vultology and behavior of that specific signal. Over time, with the addition of hundreds of samples, this develops into an expansive reservoir of expression-trait conjunctions (signals) with both high and low levels of fidelity. The signals with the highest levels of fidelity are retained as part of the CT model and used in the construction of the theory.

The empirical domains develop this code into a tool that can predict an individual's behaviors, based on their evidenced expressions, as a matter of probability. A example of a prediction may be: "You display signals PR-5/PR-4/PR-3 with high regularity. Individuals with high frequency of these signals are 250% more likely to be involved in economics than the mean." However, the empirical domains do not assert the cognitive meaning or psychodynamic significance of these correlations, as that lies outside of their scope. They report only the likelihood of certain behaviors manifesting in a person, due to the presence of certain expressions.

The other two domains (computation & psychodynamics), take the information provided by the vultology-behavior conjunction and build analytical models that can explain the correlations from a computational and psychological perspective, under the premise of embodied cognition. The computation domain creates a computational model that aims to explain why these specific signals emerge consistently in tandem with these psychological traits, and models how the two may be connected in their cognitive circuitry. It then develop predictions, based on that frameworks, about the deeper nature of a subject's thought processing style, based on the habitual use of certain signals. These predictions may be tested in the form of cognitive exams aimed to measure modes of problem-solving.

The psychodynamic domain likewise creates a model of human consciousness in parity with the vultlogy-behavior conjunction, connecting these conjunctions to complexes which play a role in the experience of our inner reality. It then makes predictions, such as what elements of cognition a person may have in their unconscious, or under the influence of repression, based on the signals visible on the body. These predictions are then tested in a therapeutic setting.

Adjustments to the CT model are done when there is a significant mismatch between the expressions documented by vultology, the data gathered by behaviorism, the cognitive exams gathered by the computational domain and the subject's psychology as anticipated by psychodynamics.

Given that the experimental methodology of the CT model is probabalistic, rather than deterministic, adjustments are made to the model when the fidelity of any theoretical tenant falls below a threshold of statistical significance. When enough outliers accumulate, a note is added to the list of pending revisions regarding the upcoming change to the model.

Revisions are changes made to the model after there's a significant accumulation of outliers in the data. These revisions are documented in a log, alongside a change to the decimal number of the model. For example, the model may be changed from Model 2.0 to Model 2.1. The model's version number (full digit) is not changed unless there is a fundamental structural departure from the previous model.