A compound function refers to an emergent effect produced by the two poles of a function axis oscillating together rapidly. The oscillation of a function axis from one pole to the other happens many times per second as our cognition works to give us an unbroken real-time awareness of our world. As a result of this, the two poles create a third byproduct in the same way that a color wheel with two colors would create a third color blended from the two, when spun up rapidly. For example, the activity of Si + Ne will combine to produce an attribute conjunction of I (from Si) and N (from Ne), into an I+N attribute conjunction. This attribute conjunction is called a compound function, rather than a native function, as it is an emergent effect rather than a core reality of the person's psychology. A compound function such as IN is attitudinally similar to Ni, but is coming from an entirely different metabolic origin. 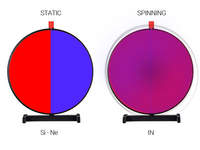 The compound functions (IN, IS, IT, IF, EN, ES, ET, EF) are distinct from the native functions (Ni, Si, Ti, Fi, Ne, Se, Te, Fe). Compound functions like IN will lack the metabolic features of Ni, as described by Model 1 and Model 2. It's therefore important to note that IN ≠ Ni, even though both will have the same general attributes of "I" and "N." At the level of attitudes, both can accomplish the same general tasks, if no attention is placed on metabolic analysis. However, Ni is a process possessing metabolic properties exclusive to Ni-Se users, such as: Isomorphic Intersecting Objects and Geometric Convergence. These properties are not inherited when the Si-Ne oscillation cycles rapidly to produce an IN attribute conjunction, because Si-Ne lacks the essential metabolic nature necessary to produce those effects. IN is also not a Pi process, but is the net effect of a Pi and Pe process working together.

The compound functions require the collaborative activity of both functions within a pole in order to activate. As such, a minimal amount of development in both functions is necessary to establish the combined effect. However, this amount of development does not need to approach conscious levels for the compound function to arise. For example, an Fi-lead who has integrated their Te's ontological status (only 1/4th of its consciousness), may activate the IT compound generated from Fi+Te working in tandem. But if an Fi-lead exists with a repressive relationship to all aspects of their Te, the IT compound cannot be generated.

The symbol "->" is used between these conjunctions to mean "in service to." For example Fi->Te (producing IT) can be read as "Fi in service to Te" where Fi is being put to work toward the operation of Te. When the functions are written in reverse, such as in Te->Fi (producing EF), then it is Te that is being put to service for Fi. Both poles in an oscillation can be put toward the other's aims and ends, which gives rise to these two conjunctions that manifest from each oscillation.

Each of the four quadrants - Alpha, Beta, Gamma and Delta - possesses a block consisting of their four native functions and their four compound functions. These blocks are: