The current CT hypothesis suggests that the emergence of human language developed rapidly between 200,000 and 60,000 years ago, due to the use of neural recycling. Evolution being a conservative enterprise, neural recycling allows for the re-purposing of existing circuitry to fulfill new tasks, rather than the development of entirely new ones. The hypothesis proposes that language is connected to action in a bi-directional manner because our recent capacity for language emerged from the re-purposing of action/motor regions towards a new task.

The hypothesis suggests that this new task, the development of language, was at root synonymous with the new capacity for infinite and digital symbolic representation, or abstract object recursion. Consequently, abstract object management is connected with neural activation of certain regions (depending on the nature of the objects being conceptualized) as well as their explicit actions and expressions in the outer world:

Movement has been shown to influence language comprehension. This has been demonstrated by priming motor areas with movement, increasing the excitability of motor and pre-motor areas associated with the body part being moved. It has been demonstrated that motor engagement of a specific body part decreases neural activity in language processing areas when processing words related to that body part. This decreased neural activity is a feature of semantic priming, and suggests that activation of specific motor areas through movement can facilitate language comprehension in a semantically-dependent manner. An interference effect has also been demonstrated. During incompatible ACE [Action-Sentence Compatibility Effect] conditions, neural signatures of language comprehension have been shown to be inhibited. Combined, these pieces of evidence have been used to support a semantic role of the motor system. 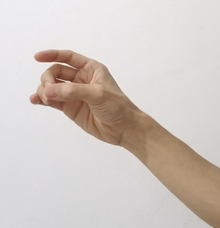 An example of this effect can be noted in the human tendency to "grasp" the air when focusing on isolating or highlighting a relevant piece of information. Hand chopping motions are also examples of motor movement activation, corresponding to the conceptualization of locomotive objects (verbs). The CT hypothesis proposes that conversational expressions are unique among bodily expressions, in that they appear to not serve a functional role in the environment (i.e. there is nothing in the air to grasp), but are explicable as "action abstractions" and vestigial effects emergent from their evolutionary legacy. The proposal suggests that as humans gained the capacity for infinite abstraction, actions were simulated in the mind (as thoughts) and enacted in the body without corresponding to a tangible environment since abstract information is intangible. The body is left with no tangible objects to grasp but it nonetheless fires the circuits associated with movement and grasping - causing gesticulations.

The CT model explores this connection between actions and language by documenting all conversational expressions and examining the nature of the linguistic processing that happens alongside of them. The model suggests that through this avenue we can reverse-engineer how human language (as abstract object management) is constructed.