Fallen affect (or Fa) is an emotional signal which is statistically linked to the neuroticism spectrum, or an index of sensitivity to “negative emotion.” The fallen affect scale ranges from 1 to 5, showing the degree of fallen affect within a person's countenance, where 5 is the heaviest amount of falling. 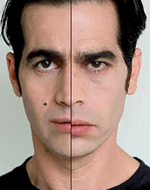 Fallen affect is visually defined by a heaviness falling over a person's countenance, affecting every element within it. This downward falling remains a persistent baseline of the face, independent of momentary emotional expressions which may deviate from the mean. More specifically, this falling can be seen in:

The eyes and brow will appear heavy, causing a weighted appearance that exists independent of Grounded or Suspended vultology, but which stacks atop of it. Qualitatively, the eyes will appear to lack a joyous "spark", and will have a defeated expression. While Grounded or Suspended ocular tension normally consist of one lax and one taut eye area (either the preseptal or pretarsal), fallen affect moves the entire obicularis oculi into a lax direction. Nonetheless, one eye area will still remain more taut relative to the others, which allows us to distinguish Gr vs Su ocular tension, relative to this baseline.

This signal corresponds to what the Five Factor model calls the neuroticism spectrum, or an index of sensitivity to “negative emotion.” High levels of neuroticism indicates susceptibility to anxiety, depression, bipolar behavior, emotional volatility and the like. Fallen affect is a visual signal that stands outside of the Vultology Code and was discovered by Renee Bayard, and further developed by J.E. Sandoval, as a way to account for anomalies in the psychologies of types. So far it would appear that this signal can accurately identify at least the most severe cases of mental illness and depression. A score of 4 or 5 on the scale is a strong predictor for mental illness. However, the absence of the signal may not discount the possibility of mental illness, but the presence of it very positively suggests it.

The presence of a strongly fallen affect (4 or 5) indicates an acute psychological reparation process is either pending or underway. One could equate this metaphorically as a journey into the underworld. Individuals with a strong fallen affect are often familiar with the struggles that come with submersion into depression, anxiety and the occult. They will tend to understand the world from a place of familiarity with the darker underside of humanity. They may have a keener understanding than most about what causes pain and suffering, as well as how to rise above it.

From a psychodynamics perspective, this familiarity with darkness is synonymous with a degree of ego destabilization from having contact with the shadow and possibly from suffering episodes of overtake by it. As such, fallen affect is statistically correlated to the rising of unconscious (shadow) functions into consciousness. There is a positive correlation between the development of the lower two functions and the presence of fallen affect, suggesting that fallen affect may appear as a side-effect of attempted cognitive integration. The conflicts between their functions may not be fully reconciled, causing the struggle of opposites to play out in their own psychology and lead to internal emotional volatility and stress. This fragmentation minimizes as emotional health is restored.

The diagram above shows a depiction of the fallen affect scale. The image is of Aviv Geffen, who suffers from strong depression and who is a 5/5 on the scale. The image to the far right is the original and the left side images were photo-manipulated to approximate the difference between non-fallen and fallen, for the sake of comparison.

The identification of a person's score on this scale can help practitioners to identify where a person may be in their psychological journey and the condition of their mental health. With the aide of psychotherapy, a reduction of fallen affect may be an indicator of integrative success and a reduced cognitive fragmentation. The aim of psychotherapy is therefore to reduce the level of fallen affect present in an individual.