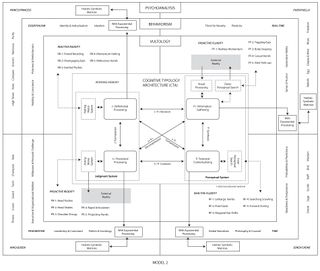 Model 2.0 is the most current theoretical interpretation of the data gathered by the CT project. It proposes the existence of genetically originating cognitive differences among individuals, which manifest differently in a scale-dependent manner. The model is based on a holistic methodology, tracking the phenomenon across four successive scales of magnification: computation (milliseconds), vultology (seconds), behaviorism (days) and psychodynamics (years). The aim of the model is to have a coherent explanation for cognitive behavior from micro to macro scales, adjusting the theoretical architecture between these four layers as more information is added to the database. 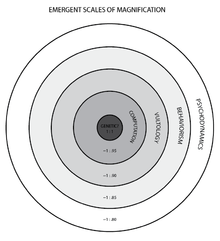 The model is structured from an emergent perspective, aiming to map the existence of a genetic phenomenon, involved in cognitive processing, which manifests in a person at different emergent scales. The successive emergence of these scales can be summarized as:

At the most incremental scale, the theorized genetic factors generate differences in cognitive processing in a person. These processing differences translate to different emphases on the ontological properties of objects and different information encryption styles. As a result, the same external reality will be computed differently by people with different cognitive typologies, due to differences in data encoding techniques. These encoding differences transpire at the millisecond scale, existing at a scale below conscious awareness, but creating that very awareness by their recursive activity. The signature of these encoding differences can be identified through an analysis of patterns in motifs matrices. However, due to the derivative nature of encoding analysis, the expected parity between the genetic root of the phenomenon and the resultant cognitive processing is not 1:1. Pending further data, the model approximates a 1:.95 relation between the genetic root and the resultant cognition.

As the CT model is a theory of embodied cognition, the second scale of emergence manifests through the analysis of the embodied effects of cognition. At this scale, the architecture produces visible effects in the form of visual search and motor system activation, which are embodied actions necessary for the algorithms to compute their information. Thus, the second scale of this phenomenon expresses itself as differences in the vultology of subjects possessing certain information encoding styles. These elicited signals can be analyzed second by second to deduce the encoding style used by a given individual. However, due to the derivative nature of vultology, and its distance from encoding, the expected parity between the encoding style and expressions is not 1:1. An analysis of vultology is subject to the introduction of noise variables such as physical impairments in expression or conditioning than can obstruct the analysis. Due to these factors, the model approximates a 1:.90 relation between the genetic root and the resultant vultology.

After the vultological effects, the next scalar emergence we see is the expression of behavioral traits and habits spanning across days. The presence of different data encoding styles will eventually result in a diversity of behaviors being statistically more likely in certain people than others. This scale analyses asymmetrical preferences in activities, career choices and specific traits that are likely to emerge in people due to their cognitive processing style. These behavioral traits can be used to estimate or predict the encoding style in use. However, due to this field's derivative nature and much further distance from the genetic root than computation or vultology, the predictive power of these behavioral traits is only estimated to be around 1:.85. Specific behaviors will each have their own correlative value, with some behaviors being more indicative of a given processing style than others.

The fourth scale magnifies these processing styles across the psychic totality and life narrative of the individual. At this scale, the cognitive processes participate with the rest of the psyche and become part of a personality complex with instinctual reactions, habits, preferences, opinions and explicit or implicit motivations. A cognitive style is a modality of information processing, but at an emergent level it becomes a member of a motivational circuitry that sources aims from limbic and thalamic centers. Thus, the definition of personhood itself is affected, so that the ego complex and shadow complex of a person are shaped by what cognitive processes they have in consciousness or unconsciousness. The nature of an individual's ego or shadow can therefore be anticipated based on the results of their computational, vultological and behavioral analyses. However, due to the multi-variability introduced by every instinctual center, and the way it can cause counteractive effects, a psychodynamic prediction will not have a 1:1 correlation with the genetic root. The model approximates a 1:.80 relation between the genetic root and the predicted psychodynamic situation of a person.

The model hypothesizes that the natural levels of convergence between these four domains is explicable by a shared genetic origin, and the proportional decrease in parity across the domains is due to the greater introduction of noise variables as magnification happens. However, pending confirmation of the genetic factors involved, the model uses a probabalistic approach to type identification where the probability of an accurate typological evaluation is multiplied by the convergence of each of the four domains under Bayesian statistics.

The table below lists the elements of the four domains alongside their counterparts:

The table below lists the type classifications of the four domains alongside their counterparts: