Of all four perception process, Ne is the most internally divided. Its entire operation revolves around the assimilation of new information, however, the information Ne collects from the environment will never fully represent the actual objects observed.

This is because Ne’s abstract nature holds no interest toward the environment as it truly exists, but only in what it can infer from it. Its eyes will focus on an object so long as that object is a means to create abstract, situational associations. If an object carries no novel or abstract qualities which Ne can extract and correlate to other datasets, the object becomes a vague, peripheral impression, void of any relevance. The eyes of Ne will then diverge their focus to another mental or literal object with the intention of finding another association, ad infinitum.

For Ne, the information it registers from a literal object will not be exhaustive or detailed, but be a caricature of it. Iconic qualities are emphasized while nuance is omitted, making it easier to mentally manipulate the object spatially and relationally.

Two unrelated objects may be mentally associated or combined when details such as scale, shape or material are omitted; details which might make the association wholly implausible if they were considered. But by being lenient with this information, Ne succeeds in generating many more hypothetical arrangements between things than it ever could do otherwise.

And as a perception process, the viability or legitimacy of these associations is not the domain of Ne’s concern. It aims only to bring forth information in the form of potential arrangements from which the judgment processes can discriminate.

Due to this lack of interest in details, the eyes of Ne will be far less strained for visual input than Se. Ne eyes will never fixate on the object of its focus, seeming instead only to be casually or passively glancing at it.

While the eyes may indeed open widely by contracting the pretarsal region of the orbicularis oris, the orbital region will not be taut, but almost entirely relaxed. The area immediately surrounding the eyes will be soft, holding the eyes within a gentle embedding. This will give the eyes what may be called a naïve or childlike appearance. 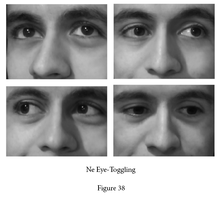 The internal division in Ne between visual engagement and diversion will demonstrate itself through an eye-toggling effect. The eyes will quickly and casually wander about, moving in their sockets while not heavily steering the rest of the head in their direction.

As with all perception processes, the head will indeed follow the eyes, but only when a strong enough interest is taken toward a certain direction. Otherwise the eyes will simply toggle effortlessly between various elements of the landscape. In Figure 38 we see various examples of what this toggling may look like.

Additionally, this eye-toggling will also happen when Ne scans the internal world of Si. As mentioned in Chapter 9, Ne-Si often becomes looped in on itself, engaging its proactive association with the static datasets that have been archived by Si. As this occurs, the eyes will simulate real-world exploration, searching Si’s mental landscape while darting casually in their sockets. This will give Ne eyes a distinctly scattered quality, as eye-toggling occurs far more strongly and often in Ne types than Se types.

This is because for Se types, associations can be generated viscerally and gradually over long periods of time by Ni without any distinctly proactive expressions. In contrast, Ne carries the responsibility of creating the mind’s conceptual associations in these types, which can only be generated through real-time cross-contextualization. An Ne-Si type must engage the explorer process in order to interrelate their sense of reality, which will result in the aforementioned scatteredness being a standard quality of their eyes.

When Si becomes even more heavily involved in Ne’s exploration, a variation of this signal can be seen. Toggling will happen underneath the hood of an Si scowl. When Si lead types reference their Si, toggling is not a common occurrence, but in types that prioritize Ne over Si, scowling rarely occurs without eye-toggling.

Since, for Si types, recall is effortless and natural, it requires no intense involvement from other processes. But Ne types don’t access their Si effortlessly, causing instead a heavy concentration on the recall. Here, the brow weighs heavily over the top part of Ne’s eyes, partially breaking the gentleness of the eyes. 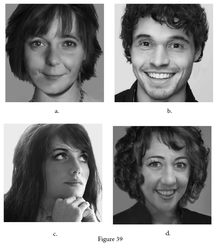 Along with the scatteredness of the eyes, Ne produces strong momentum in the body. It will carry a natural level of excitation which, in pronounced cases, may manifest as restlessness. The eyes and body of Ne are always eager to proactively intake information, causing alertness to the environment – despite the lack of any specific point of focus. Subtle swaying and body jittering is common in these types, often syncopated at different latitudes in the spine.

This proactive process is not restricted to rigid movements like Je, allowing instead for energy to flow loosely without any coordination. Like the movements of its eyes, Ne’s energy will be spritely, spontaneous, and quick to shift trajectories, giving it a type of natural buoyancy. One might feel a sense that this type could move at any given moment; even when their body remains still, it will merely appear suspended between one movement and another.

It’s been my experience with Ne types that their net psychological activity will also produce certain consistent behavioral patterns which may be worth noting. Often times the momentum of their associations will not confine itself to their mind. Excitation and proactivity will intermingle themselves with these playful associations, causing them to be extroverted.

The externalization of Ne’s associations will not be dialectic or resolute, but expressive; a direct translation of the unguided impressions at work. They will manifest as a parody of the hypothetical situation that exists in their mind at the time; a miniature enactment of the drama or novelty of the interrelation.

Personifications may be created using body language, facial exaggerations, voice modulations, accent imitation, and the like. These mini-skits can be as brief as a split second and dissipate as quickly as they arrived. When Ne is especially heavy, parodies will be very common and may even become the person’s most typical form of interaction with the world.