Psychodynamics is one of four domains comprising the CT model which focuses on the subjective experience, or qualia, of cognitive processes and their influence across an individual's psychic totality. The domain posits that each of the four modules of the CTA has a corresponding phenomenological reality which manifests in the the subject as an aspect of their conscious or unconscious personality. The therapeutic goal of psychodynamics is to describe what aspects of the psyche may rest in a person's conscious or unconscious, as well as their level of integration of each energetic process, as anticipated by their vultology-behavior conjunction.

The CT model follows a physicalist approach, where mind and body are understood as being a single system, and subjective experience is emergent from neurological computation. From this vantage point, the qualia of an individual is said to be generated by the aggregated activity of computation transpiring at the millisecond level. As part of phenomenology, a function therefore manifests not as computational instructions but as a personality. There are two factors involved in the creation of a personality from a cognitive function.

An individual cannot observe computation happening within themselves, as computation gives rise to their very capacity to observe and deduce reality. Computation happens at a scale below conscious awareness, creating that very awareness by its activity. Thus, the presence of our cognitive functions in our psyche can only be experienced in an aggregated form after its activity multiplies exponentially across the psyche to produce emergent effects. These emergent effects will carry a different nature than the instructions used to produce it, manifesting instead as modes of thought. The emergence of a function expresses itself in our minds as a modality of contemplation, which may produce an inner dialogue. The conflicts between function modules can therefore manifest phenomenologically as two or more conflicting inner dialogues, each analyzing the situation from their respective ontological biases. The scalar magnification of function modules into modes of thought is the first aspect of a function's emergent personality.

The second aspect of a function's personality relates to its conjunction with other elements of the psyche. While a function can be described computationally in theoretical isolation, emergent effects cannot be isolated from other psychic components. A function will always process information in tandem with other processes in a psychic economy. Therefore, scalar magnification necessitates a perspective of a function which takes into account its juxtaposition with other processes within a holistic expression. At this scale, the operations of a given function cannot be described without also describing adjacent psychic processes - such as instincts and emotional fixations - that have connected themselves to the function, and which also multiply their activity with it. The function therefore becomes part of a psychic complex with instinctual reactions, motivations, habits and preferences provided to it by its partnership with the rest of the psyche. A function by itself is little more than a module for processing information in a specific manner, but at an emergent level it becomes a member of a motivational circuitry that sources aims from limbic and thalamic centers, becoming part of a personality complex with a mode of thought and a motivation.

Due to the formation of personality complexes, the CTA manifests phenomenologically as a quaternity, a group of four personalities that have varying degrees of autonomy in the psyche. The personality that emerges from each of the four functions will vary depending on what other psychic elements are part of the personality complex. The table below describes the general personality of each function:

Psychodynamics is an approach to psychology that emphasizes the study of psychological forces as a causal system, subject to laws of conservation of energy. It looks at the psyche as a natural system to which all laws of physics apply. The term was inspired by the field of thermodynamics, and is used to describe the processes of the mind as flows of psychological energy (libido) in an organically complex brain. The basic principles of psychodynamics used in the CT model are:

The first principle is equivalence. The term was coined by Carl Jung from an idea first described by Ernst Brücke and Sigmund Freud. It can be summarized by saying "the total amount of energy in any given physical system is always constant, that energy quanta can be changed but not annihilated, and that consequently when energy is moved from one part of the system, it must reappear in another part."[1] In the context of the CT model, psychodynamics studies equivalence in relation to the four energetic functions which always add up to the same total energy. The principle holds that the totality of psychic energy is always conserved in ever person, but is in different forms or states as determined by nature and life experience.

The second principle is polarization. The term refers to the tendency for natural, including psychic, systems to differentiate or polarize into positive and negative forms, as a result of having an existent property. It suggests that in order for equivalence to be preserved in tandem with existence, existence will manifest dualistically such that the net sum of both polarities is zero. The principle proposes that because destructive interference results in the cancellation of psychological elements, psychic elements with constructive interferences are those most likely to survive. Thus, the principle suggests that the psyche tends towards, and incentivizes, polarization. The principle has parity with De Broglie's thesis that "to each portion of energy with a proper mass m0 one may associate a periodic phenomenon of the frequency", wherein particles have mass (form) by virtue of their polarization in oscillation or frequency.

Landscape of the Psyche 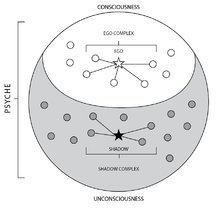 Psychodynamic interactions transpire within a basic psychic landscape. The nature of this landscape is one composed of two domains: consciousness and unconsciousness. Consciousness is all that psychic territory which has been charted and which we have access to. It consists of identified elements and psychic elements that we have conscious control or dominion over. The unconscious is that psychic territory which we do not have direct access to, as it has not been mapped, and we thus remain unaware of its contents. We do not have control over the contents of the unconscious territory. In each of these territories there is a complex-formation function. In consciousness we have the ego, and in the unconscious we have the shadow.

The ego is a cognitive function responsible for our brain’s capacity to formulate a sense of self. The ego is the cognitive faculty that allows for self-awareness — or the concept of an “I” to arise. Thus, it can only be composed of conscious material, although not all conscious material is part of the ego. The ego is a point of fixation within the realm of consciousness, and a source of personal definition. The ego may also fixate itself on one of the aspects of integration of a function, if that aspect is conscious, even though the rest of the function remains unconscious. In such a case, the ego is identified with the muse. This dynamic typically leads to the development of the function fully into consciousness. Secondly, as a complex-formation process, the ego is a centralized point of libido which rallies together psychic processes into a hierarchy, forming the ego complex. Most commonly, the thetic functions are part of the ego complex, and the antithetic functions are inclined to become part of the shadow complex.

The shadow is a function that likewise rallies together cognitive faculties, but only from unconscious material. It organizes aspects of the unconscious into an unconscious personality complex. Unconscious psychological needs will rally together cognitive faculties, through the shadow function, and conjoin them together into an operative agent. This operative agent works unconsciously to meet the needs that the ego complex is not attending to. The shadow is the result of the ego function working outside of its own awareness. It organizes motivational systems together like the ego, but does so with less deliberation. Thus, the shadow will be an amalgamation of repressed content, loosely organized, but organized nonetheless. The shadow, as a personality, will be antithetical to the ego, manifesting as an alter-ego. In the case that a person has a thetic development, the antithetical functions can form an unconscious complex with its own personality.

In CT, a function is designated as "conscious" or "unconscious", indicating its existence in the corresponding psychic territories. Consciousness is determined by strong expressivity in vultology, the presence of traits in behaviorism, and by a strong presence of the four aspects of integration in psychodynamics. A person's level of integration is measured via a psychological survey and is compared to the other domains for convergence. If there is parity between the domains, the function is said to be conscious. From a psychodynamic perspective, a function being conscious means the function has integrated with other aspects of the psyche: mental (ontological status), emotional (purpose & value), physical (practical abilities) and spiritual (archetypal character). Such a function will always exist as a larger personality complex, with ties to other brain areas such as emotional centers, speech centers, visual centers and motor centers. A conscious function accomplishes this integration of psychic vectors through a strong concentration of libido. However, due to the principle of equivalence, this concentration of libido around the function will come at the expense of libido in other areas of the psyche.

A function that is unconscious will exist as an information processing module, but will possess little power over the rest of the psyche, being largely unattached to the emotional and instinctual parts of the brain. In most cases, it will not be part of a larger complex - unless it is a shadow complex. It will remain only cognitive in nature, and compute information in subordination to the agendas of other complexes. However, if the unconscious function is part of a shadow complex, it will manifest fantastically, as a daimon. If the function is in the process of developing into consciousness, it will manifest fantastically as a muse. An unconscious function is likely to rise into consciousness due to the principle of centroversion, to counterbalance the effect of its polarity.

The principles of psychodynamics and landscapes of the psyche combine to create a picture of function development like the one below:

The table above depicts function development using the binary system, for the purpose of simplification. The full resolution of function development is higher, and is measured through the aspects of integration. In the context of this simplification, the table demonstrates in what location, in consciousness or in unconsciousness, a function personality is expected to be, in a given development level. However, a function being in consciousness does not necessarily imply it is in the ego complex, although that is most likely. Similarly, functions in the unconscious are designated as likely to be in the shadow complex, but not always. Exceptions include instances where some aspects of a function are in the ego (as in the muse), while others remain in the shadow (as in the daimon). The aspects of integration of a function switch allegiances gradually as they make the transition from the shadow complex to the ego complex, or from unconsciousness to consciousness.

The libido column contains 25 bricks for each development, which are distributed in different quantities depending on development. Due to the principle of equivalence, the total number of bricks is always conserved at 25, demonstrating the preservation of psychic energy. Because of this, the I--- development has the greatest libidinal concentration of any development. Oppositely, the IIII development has the most equal libidinal distribution across the four functions.