Model 2 and Model 1 are two different modeling systems for the data gathered through the Cognitive Typology project. Both systems share a high degree of parity, while also differing in key ways, such as in purpose, design and methodology. Model 2 is backwards compatible with Model 1, while Model 1 is not forward compatible with Model 2. As of December 2020, the two models exist side-by-side, serving different agendas.

The purpose and design of both models stem from different origins, and are targeting different aims.

Model 1's aim was to introduce a hypothesis to the public based on initial observations, and to encourage the deeper investigation of the phenomenon by the scientific community. In the 2014 Indiegogo promotional video, Sandoval described the creation of his first book as "an extensive thesis."[1] He opens the preface by describing the book as "my personal study of human psychology", denoting a personal account of the phenomenon. In chapter 34, on experimentation, he describes the book as "an explanation of my own initial observations" and suggests various methods to verify or falsify such observations. Thus, we understand Model 1 to be a formulation of an initial hypothesis, as is often the case in the early evolution of sciences. The aim of Model 1 also includes the gathering of interest and support from the Jungian community to improve the experimental rigor of typings, and to propose an empirical means to do so. To the extent that the broader Jungian community remains lacking in experimental testing of types, Model 1 continues to serve as a public promoter of objective measurement, suggesting an elevation of typing standards.

Model 2's aim is to design scientific methods to properly test the hypotheses underlying CT, and to secure funding to do so. To that end, Model 2 is not framed in relation to Carl Jung's work, as this would conflict with the necessity of scientific testing to design experiments without appeal to work that does not have published data on hand. Since Jung's Psychological Types does not have usable published data, experiments must be designed from the ground up based on new premises which are empirically sound and which can produce usable data. To do this, Model 2 separates itself into four domains of study - computation, vultology, behaviorism and psychodynamics - each of which tackles a hypothesis with a separate set of experimental tools for data gathering. These four domains independently collect data, and then cross-reference the data with themselves for matches or mismatches using a multidisciplinary methodology. The eventual aim of Model 2 is to publish peer reviewed studies, verifying or falsifying various hypotheses of the overall model, and to adjust itself according to the results. 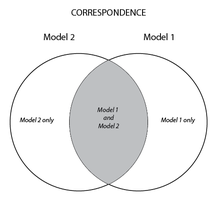 The theory elements of Models 2 and 1 have a moderate correspondent relationship to one another. However, correspondences between Model 2 and Model 1 terms are contingent on what elements of each theory are in question. For example, if emotional attitude is being highlighted in Model 1 as an attribute of Fe or Fi, the correspondence to Model 2's G+ and R- is negative. However, if the registration of biotic agents is being highlighted, there is a positive correspondence between the two theories. This relationship follows an intersectional venn diagram formula.

The table below lists the elements of Model 1 alongside their corresponding Model 2 counterparts:

The table below lists the type classifications of the four domains alongside their counterparts: