Model 1 is a theory used in CT, formulated using a Jungian framework and nomenclature. The model was first introduced by J.E. Sandoval in a 2013 video series and later published in his 2016 book Cognitive Type: The Algorithm of Human Consciousness as Revealed via Facial Expressions. The model is described as "the physical realization of that very same essential psychology" introduced by Carl Jung in Psychological Types, and which is "now understood through a concrete and quantifiable form." It introduced the term vultology as a methodology for determining type empirically. Model 1 offers an objective methodology for determining type, however it is only partially compatible with traditional scientific practices as it investigates qualia. Model 2, introduced in 2020, is the branch of CT that is focused on traditional scientific testing, while Model 1 is designed as a therapeutic instrument for analytical psychologists.

The theory postulates that all people possess a cognitive type, which is a specific mode of metabolizing information. This type is a permanent aspect of personhood, and is an element of an individual's phenomenology. It is also suspected to be a genetic feature of personhood, as indicated by preliminary analyses of identical twins[1]. A person's type is comprised of either Fi-Te or Fe-Ti judgment functions, Ne-Si or Se-Ni perception functions, and a primary energetic function which is either Ji, Pe, Pi, or Je. This creates 16 possible types which comprise the human population. The model proposes a method of identifying this type by cross-checking a person's metabolism, vultology, behavior and mythology.

The model proposes that the primary division of the psyche is between Judgment (J) and Perception (P), where Judgment handles the differentiation of information and Perception manages the flow of information. Both Judgment and Perception have an internal oscillation composed of a proactive (E) component and a reactive (I) component. The reactive part of judgment handle the inner differentiation of data into organized definitions (Ji), and the proactive element acts through those differentiations to attain external organization (Je). Proactive perception handles the absorption of new information (Pe) and reactive perception handles the storage of that information into mental maps (Pi). This gives rise to four energetics (Ji, Je, Pi, Pe) which comprise the core of the model, and act as a set of four processors which collectively handle the parsing of all information types. Every type has these four energetics, allowing them to handle all information types and to form an unbroken sense of reality.

The second element to a type refers to what style of Judgment or Perception a person has. The oscillation between proactivity and reactivity within J or P is referred to as an axis, giving us the Ji-Je axis and the Pi-Pe axis. An axis has a special ability to pass information along to its other pole. There are two variants of the J axis which are either Ti-Fe or Fi-Te. There are also two variants of P axis which are either Ni-Se or Si-Ne. A person either inherits one axis or the other, and this remains a static feature of personhood. This creates four possible inheritances, which are each given a greek letter designation:

A person is born into either of these four function quadrants, and is also in possession of a dominant energetic (as either Ji, Je, Pi or Pe). These two elements multiply to give us 16 possible native types which are innate elements of cognition: 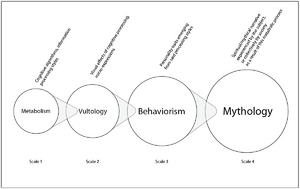 The model is structured from an emergent perspective, mapping the existence of type as it manifests in a person at four different emergent scales. These scales can be summarized as:

At the smallest scale, the phenomenon of type is expressed as different modes of metabolizing information. Metabolism refers to the way in which our brain processes and parses data at a rapid rate to produce our unbroken sense of awareness. Different ways of parsing data are different forms of metabolism. This style of information parsing happens before even the formation of any thought, so that the very nature of our thinking rises into our mind only after the parsing has already taken place and has structured our thoughts through that metabolic path. However, a specific metabolism does not prevent any person from thinking or having any particular thought. It only affects the way every thought is parsed, according to certain properties.

The metabolism we possess is difficult to observe directly, since it happens before we even have thoughts. The very first objective window we have into our information metabolism is in our vultology, which reveals the secondary effects of that cognition as it’s happening second by second. We may not always be able to trace the construction of our thoughts from an inside view, but we can track their emergence from the outside-in. The very act of processing information involves the body, as the mind and body exist in a bi-directional relationship. Therefore, the body elicits micro and macro expressions that reveal what kind of processing it is doing, and this can be observed to determine what metabolism is in use within a person.

The third layer of emergence is behavior. This is the layer most rich with detail and information about what it means to be a type in a practical sense. This layer documents the typical behaviors that arise in the life of a person due to having a certain metabolic pathway. This can involve details such as typical career paths, work relationships, habits, interests and passions. And although no single behavior can ever be equated 1:1 with a metabolic path, since every notion or action is accessible to any person, behaviors will cluster naturally around people with certain metabolisms, and behavioral profiles describe what personalities this usually generates.

The final layer of emergence is mythology, which is also the largest scale. At this scale, the effects of having a given metabolism multiply into an overreaching set of archetypes that the person is in permanent inner relationship to. Being a certain type transforms a person's entire existential journey across their life, and their metabolism manifests itself as a set of sub-personalities which also help comprise their primary personality. The contents of this layer are explored through fantasy, dreams and symbology. This layer overlaps strongly with analytical psychology, wherein the metabolic processes take the form of figures in consciousness or the unconscious, which can be integrated or dis-integrated.

The model views types as a combination of nature and nurture. A person's type is an inborn and static feature of their nature, while development represents an individual's unique growth process as measured across each of their four functions. By default, an individual will have only their primary function in consciousness, while the other three functions in their hierarchy will be unconscious. These development levels are called:

The combination of 16 types each having 8 possible development levels gives us a total of 128 possible nature & nurture combinations. 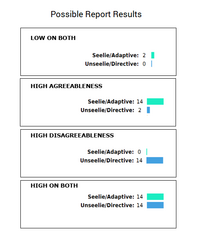 Emotions exist as a separate but parallel element to cognitive type. No emotional attitude is necessarily tied to any type. For example, it's possible to be a very unfeeling Fi-lead, or a very feeling Ti-lead. Since elements of type are methods of metabolizing information, they standard apart from how a person's emotional world may be organized. To determine emotions, Model 1 has a vultological way of identifying emotions based on two categories: emotionality level and attitude.

Emotionality is a spectrum of how strongly emotional a person appears to be, based on their vultology signals. This is determined by looking at the frequency of Ekman emotional signals, and other signals such as radiating energy and social emulation. All types can have high or low emotionality.

Attitude refers to agreeableness (seelie/adaptive) and disagreeableness (unseelie/directive) as two forms of emotionality. These two attitudes coexist side-by-side in every person, as we each have a given certain level of each. Vultology reports will measure high or low levels of each independently, so that it's possible to be low on both, high on both, or high on just one.

Fallen affect is a spectrum that refers to the downward fall of the facial muscles due to a chronic contraction of Ekman sorrow signals. This has been correlated to greater likelihood of being high on the neuroticism spectrum. Fallen affect is correlated to mental illness and more generally to disturbances due to contact with the Jungian shadow. A person with a fallen affect of 3/5 is likely familiar with the struggles that come with submersion into either depression, anxiety, mania or hysteria. However, individuals with fallen affect can also include those who have at some point fallen into submersion but who have risen from those states. Such people will contain a higher degree of integration of the shadow.

Model 1 also contains what are called compound functions, or emergent effects born out of the activity of the two poles of an axis working together. When this happens, a third effect is born - as a general attitude - which is produced from the joint activity of the two poles. This enables each type to have access to all eight general attitudes, either through a native function origin or through a compounded function origin. These eight compound functions are: